FIRST-TIME WINNER GUARANTEED AS VEGAS, WASHINGTON REACH CUP FINAL
After each winning their division during the regular season, the Golden Knights and Capitals will meet in a best-of-seven showdown to determine which club will win its first-ever Stanley Cup. Game 1 is set for Monday at T-Mobile Arena in Las Vegas (8 p.m. ET, NBC, CBC, SN, TVAS).

* This marks the sixth Final in NHL history – and first in 11 years – to feature two clubs each chasing their first-ever Stanley Cup. Either the Golden Knights or Capitals will become the 19th active franchise to win the Cup. * The Golden Knights and Capitals each earned their three series-clinching victories on the road, marking the first time in NHL history that two clubs reached the Final in that fashion. Vegas posted its last such win against the team with the best home record from the regular season (WPG: 32-7-2), while Washington clinched series on the road against two clubs that ranked among the top five in home wins in 2017-18 (PIT: 30-9-2 and TBL: 29-10-2).

* Including Vegas and Washington, 11 franchises in NHL history have won at least three consecutive series by clinching each on the road (17 total streaks). The Golden Knights are the sixth franchise in NHL history to earn each of its first three series-clinching victories while on the road, and the first to do so in one postseason.

* There are only two instances of a team clinching four series on the road in one postseason to win the Stanley Cup, and they occurred in consecutive years: the 2008 Red Wings and 2009 Penguins.

VEGAS CONTINUES REMARKABLE JOURNEY INTO STANLEY CUP FINAL
After eight months of unforgettable moments and uplifting performances for fans in a grieving city, the Golden Knights will aim to end their historic inaugural season by lifting the Stanley Cup. Vegas is the sixth team in NHL history to reach the Final in its first playoff appearance – and the third to do so in its inaugural season.

* The expansion Golden Knights, who had only one player under contract when the 2017 Stanley Cup Playoffsbegan, look to become the second team in NHL history to close their inaugural season as champions. The Toronto Arenas ended the first postseason in League history by winning the Cup on home ice, clinching the best-of-five series on March 30, 1918, with a 2-1 victory against the Vancouver Millionaires of the Pacific Coast Hockey Association.

* In addition to the Golden Knights and Arenas, only one other NHL club has reached the Final in its inaugural campaign: The Blues were swept by the Canadiens in 1967-68, when an expansion team was guaranteed a spot in the championship series.

* This marks the third straight year that a first-time finalist will compete in the Stanley Cup Final. The preceding 28 franchises to debut own an all-time series record of 11-17, including only one victory in the past seven tries – by the 2004 Lightning. 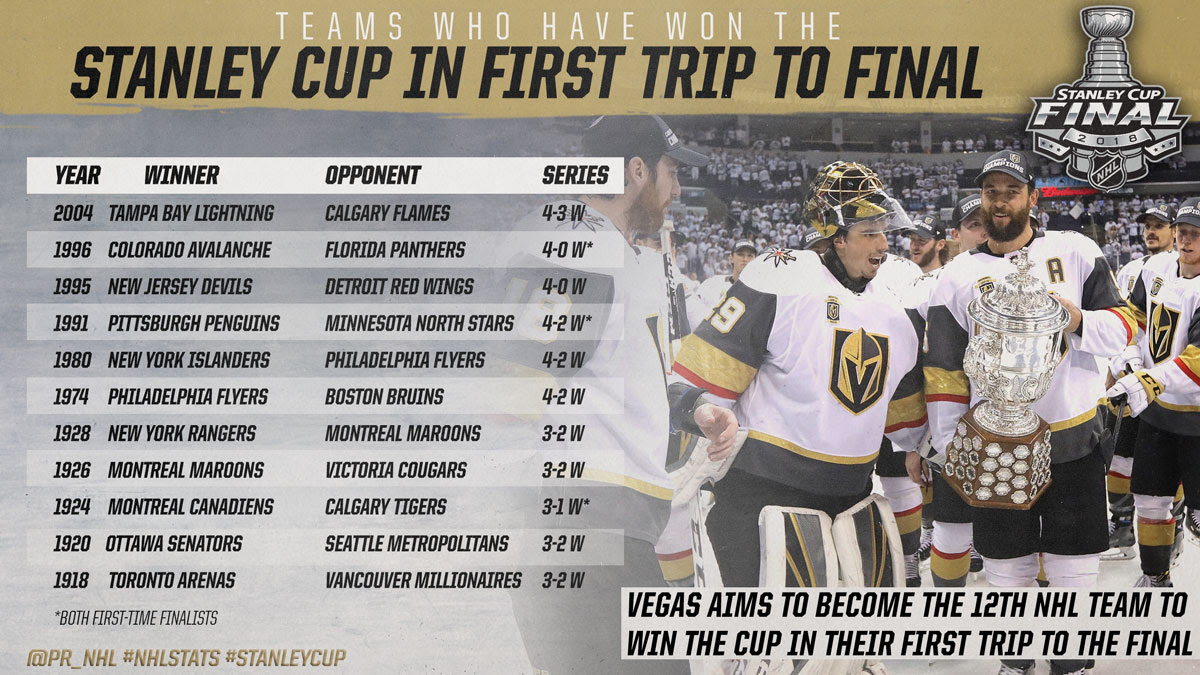 OVECHKIN AIMS TO ADD STANLEY CUP TO ALREADY IMPRESSIVE RESUME
Capitals forward Alex Ovechkin (11-11—22), who ranks second in playoff scoring behind teammate Evgeny Kuznetsov (11-13—24), looks to cap a milestone season by winning the Stanley Cup in his first trip to the Final.

* Ovechkin aims to become the third player in NHL history to score 600 career regular-season goals before hoisting his first Stanley Cup. Luc Robitaille won the Cup with the Red Wings in 2002 after compiling 620 goals, while Dave Andreychuk captained the Lightning to a championship in 2004 after scoring 634 times.

* Additionally, Ovechkin can become the 16th player in NHL history to play at least 1,000 career regular-season games before winning his first Cup – and second to do so with the team for which he has played at least 1,000 games (Steve Yzerman w/ DET). He also seeks to become the ninth player to have 1,000 career points before capturing his first Cup. * If the Capitals win the series, Ovechkin (Moscow, Russia) would become the first Russian player to captain a Stanley Cup champion. Only two European-born and trained players have done so: Nicklas Lidstrom(Vasteras, Sweden) in 2008 with the Red Wings and Zdeno Chara (Trencin, Slovakia) in 2011 with the Bruins.

FLEURY CHASING FOURTH STANLEY CUP IN FIFTH TRIP TO FINAL
Golden Knights goaltender Marc-Andre Fleury, a three-time Stanley Cup champion, is set to become the 19th goaltender in NHL history to represent multiple teams in the Final. The last netminder to do so was Dominik Hasek when he backstopped the Red Wings to a Cup win in 2002 after playing in the Final with the Blackhawks (1992) and Sabres (1999).

* Reaching the Final for a fifth time, Fleury owns a career playoff record of 74-54, including a 9-7 mark over the previous two postseasons to help the Penguins win back-to-back Cups in 2016 and 2017.

* Fleury, who registered every win during Pittsburgh’s championship run in 2009, can become the 11th goaltender in NHL history to have his name on the Cup at least four times – and the fourth of that group to win with multiple clubs. * The 33-year-old netminder has played every second of every game for the Golden Knights this postseason, allowing two or fewer goals in 10 of 15 outings (12-3, 1.68 GAA, .947 SV%, 4 SO). Only three netminders in the past 18 years have been the lone goaltender of record during the postseason for a Cup-winning team: Boston’s Tim Thomas in 2011, Los Angeles’ Jonathan Quick in 2012 and Chicago’s Corey Crawford in 2013.

* In addition to Fleury, Golden Knights forward James Neal returns to the Final after losing last year with the Predators (vs. PIT). 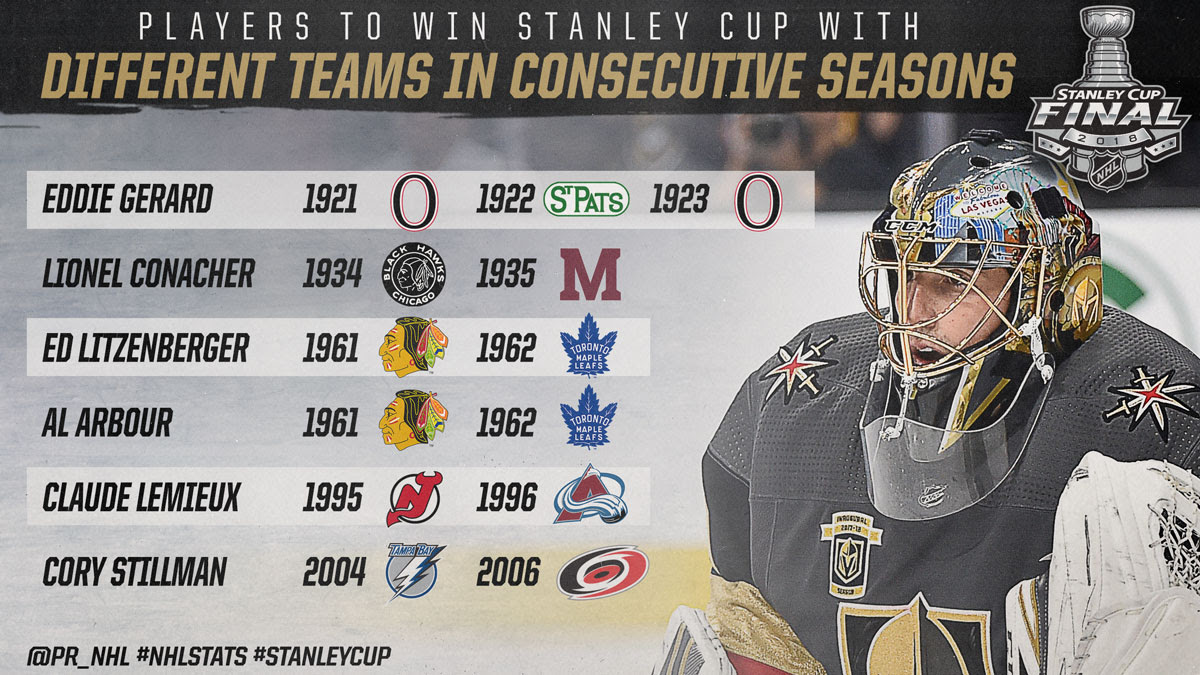 * No one has won three straight Stanley Cups since the Islanders’ run of four consecutive titles from 1980-83. Sixteen players were part of each Islanders championship.

McPHEE REACHES FINAL IN FIRST SEASON WITH TEAM (AGAIN)
Architect of what is already the most successful expansion team in NHL history, George McPhee of the Golden Knights now sits four wins away from his first Stanley Cup, with only the Capitals in his way – a team for which he served as general manager for 17 seasons.

* McPhee was hired by Vegas on July 13, 2016, after serving as GM of the Capitals from 1997 to 2014, a tenure that saw him select 12 of 25 players who have played for Washington this postseason, including Andre Burakovsky – who scored twice in Game 7 on Wednesday – with his last first-round pick with the club (23rd overall in 2013).

* McPhee led Washington to seven division titles, one Presidents’ Trophy (2009-10), 10 postseason appearances and their only other Stanley Cup Final appearance in 1998 – his first campaign with the club. Only one other general manger in League history has reached the Final in his first season with different clubs: Bobby Clarke, in 1985 with the Flyers and 1991 with the Minnesota North Stars (losing both times).

2018 STANLEY CUP PLAYOFFS MOST-WATCHED IN 21 YEARS
The historic run by the Golden Knights and longest playoff drive in two decades by the Capitals have captured the attention of hockey fans as NBC Sports’ coverage of the first three rounds of the 2018 Stanley Cup Playoffswas the most-watched in 21 years (and up 7% versus 2017).